It’s almost more than 22 years that Pokemon cards came into existence and since then their craze among the kids are growing each day.

The truth cannot be denied, we all love collecting the Pokemon cards and defeat our opponents with the power and defense of the pokemon cards we are having.

But, the question remains the same, what is the best Pokemon card in the world?

My answer to this question would be – The Best Pokemon card is the one which has the maximum power, such as attack and defense. Considering both of these values, it is Shadow Lugia, with an attack power of 1000 damage and has 300 HP (Health Points).

Since it is not the only card which will help you win the battle against your opponent, there are many more cards from different generations holding different sets of power.

So let’s have a detailed look at the list of top most Pokemon cards available in the market for your buying. 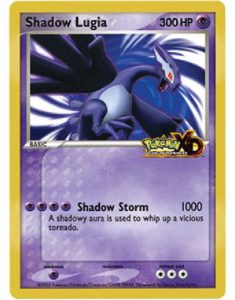 Shadow Lugia was originally released as Jumbo card and this card is not legal to use in official tournaments or events. This card also lists the logo from Pokemon XD: Gale of darkness.

It was released in October 2005 in New York. Today this card is the strongest pokemon card with an absurd damage point of 1,000 but it is not possible to use this legally. The highest tournament legal pokemon attack does 300 Damage. 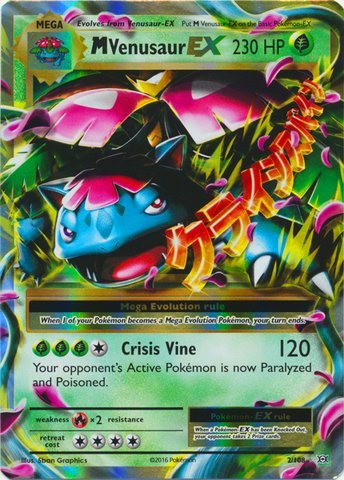 The Next Pokemon on the list is Mega Venusaur EX. It is a Grass-type Mega M Pokémon-EX card and was first released as a part of XY expansion.

This Pokemon does an amazing job when it comes to playing the role of defender, his attack of 230 Hit points can poison or paralyzes the opponent giving you enough time to think upon your next move. 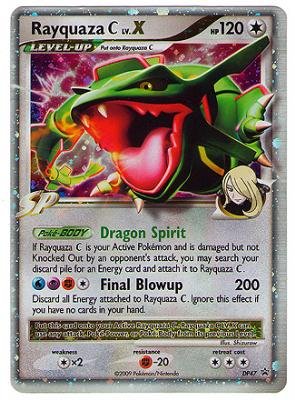 Rayquaza C Lv. X is one of the unbeatable Pokemon card you really want to have in your collection. It has the hit point of 120, but its final blow can cause a great damage up to 200 hit points which is enough to knock down any top Pokemon card.

The only drawback of this legendary dragon Pokemon is that it takes at least three energy cards to use its final blowup attack. But for that, you can choose any three energy cards from your pile of discarded cards as long as they have not fainted.

One of the most awesome things about this card is that it can use Poké-Body, Poké-Power or attack from its previous levels. 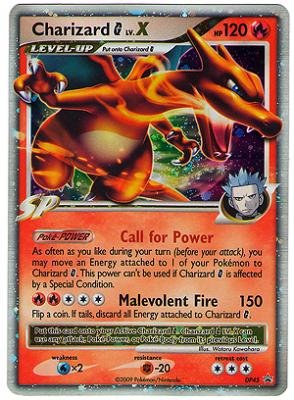 The next Pokemon on the list of Best Pokemon Cards is Charizard G Lv. X. This Pokemon is well known for his special move of 120 HP, Call for Power, which can cause an immense damage to the opponent.

The thing that makes this card a fan favorite among the Pokemon Trading Card Game is that you can use all the previous attack, Poké-Body or Poké-Power by attaching Charizard G Lv. X card with the Charizard G.

When you use Charizard G Lv. X, you can move energy cards from other Pokemon to your Charizard and get a staggering 150 damage. 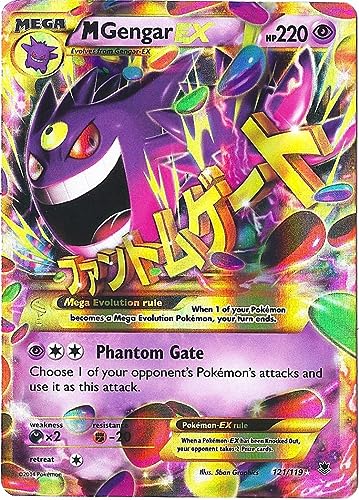 Another Pokemon Card that you should include in your collection is M Gengar EX. The main power of this pokemon is the Phantom Gate. Anytime during the game, if you use this power, you can choose one of the moves of your opponent’s card and use it against him.

Overall, M Gengar is an incredible ghost type Pokemon card which has the huge potential of destroying the opponent’s Pokemon with the huge HP of 120. 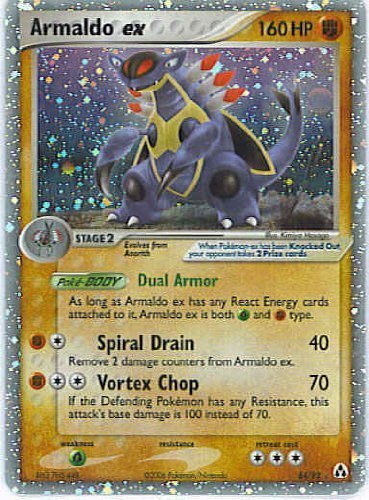 Armaldo EX is a versatile Pokemon card. It helps the player to fight in different combat situations. Armaldo has got the HP of 160 with a special ability to heal with his Spiral Drain attack.

The Poké-Body and Dual Armor of Armaldo give it a dual characteristic of grass and fighting when any react card attached to it.

The overall quality of Armaldo makes it a perfect match for the defender as well as the attacker all in one package. 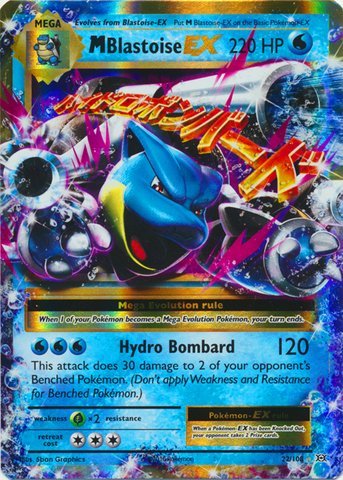 Mega Blastoise EX is a great Pokemon card to include in the collection. It can cause a Strong attack to two of your opponent’s benched Pokemon with 120 HP and an additional damage of 30 HP when you use its real power of Hydro Bomb.

Mega Blastoise EX works on the mega evolution rule, it means you end up losing your turn when one of your Pokemon mega evolves. 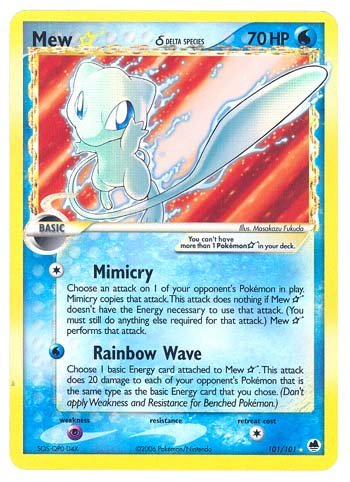 Mew is a delta species card. The Unique thing about the delta species card is that they give Pokémon irregular typing. Shining Mew Pokemon card is a nightmare for those opponents who have many cards of the same type.

The Rainbow attack of Shining Mew let the owner cause 20 HP damage to the opponent’s Pokemon of the same type. All you have to do is to attach Mew Pokemon card with one energy card and one water card.

On the other hand, the Mimicry power of Shining Mew gives you the option to replicate the attack of one of the opponent’s pokemon but for that, you must be having the energy card used for that particular attack. 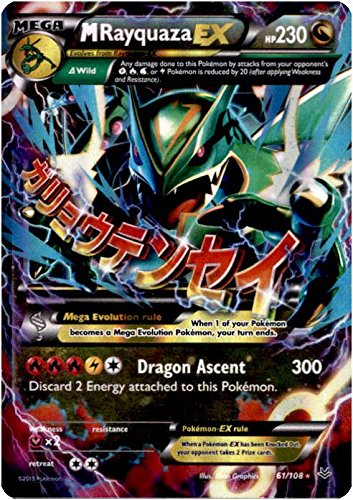 Mega Rayquaza EX is one of the most interesting Pokemon cards you could have in your Pokemon card deck. It’s Dragon Ascent attack which can cause 300 damage with an incredible HP of 230 makes it one of the strongest Pokemon card you can buy.

But as we all know with great value comes the great price, to use the deadly dragon ascent attack you have to discard any two energy cards from your collection of cards after you made the attack.

As this card is in the mega-state so it requires other cards to get evolved and then actually it will help you win the battle against your opponents. 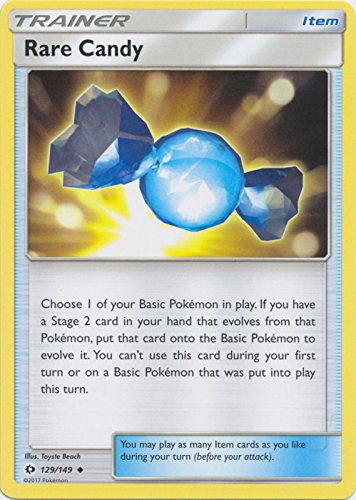 Rare Candy Pokemon card is an important trainer card. It helps the player to take out much more versatility of the Pokemon cards in their deck.

Whenever a player encounters this card during the game, he can choose any basic stage pokemon and evolve it to Stage 1 or Stage 2 for better versatility and more powers. 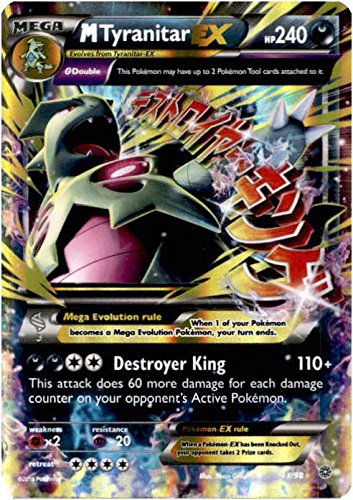 Mega Tyranitar EX comes with the same mega evolution rule as mentioned above for other Mega Pokemon cards. This Pokemon has only one deadly attack called Destroyer king. The Destroyer king attack can cause the damage of 110 with an additional damage of 60 on the opponent’s active Pokemon. 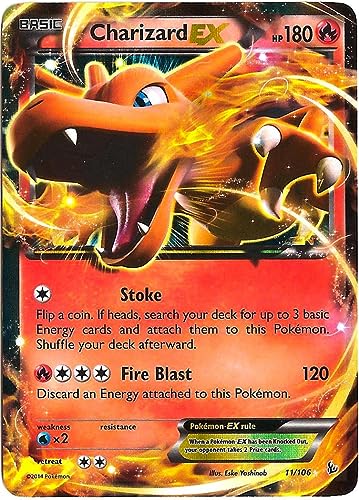 Charizard is the most famous anime in the Pokemon Series along with Pikachu and few others. And in the game also, it is one of the strongest Pokemon without a doubt.

It has an HP of 180 and carries two of the best moves, stroke and Fire Blast.

Firstly, we will discuss Stroke move. Stroke move requires 1 colorless energy card, if you get heads then you can attack three basic pokemon cards from the deck and attach all of three with the Charizard EX.

But Wait, the second move is much more special. The fire blast move can cause a damage of 120 and after using this move you have to discard one energy card from the deck. This move requires 3 colorless energy card and 1 fire card. 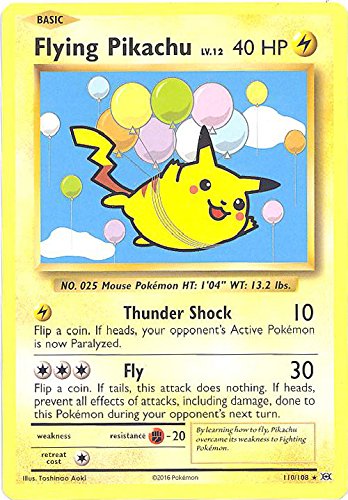 Flying Pikachu card comes with 40 HP and two types of attack, the Thundershock and Fly attack. The Thunder Shock attack can paralyze your opponent’s pokemon whereas FLy attack can make you earn 30 damage points.

No doubt, Flying Pikachu is one of the famous character Pokemon card among the kids.

What are the different types of Pokémon cards?

There are three different types of cards you will find in a deck of Pokemon Cards:

How to keep and store Pokemon cards?

Pokemon cards should be stored safely with binders and card sleeves specially made for storing cards (especially the rare ones).

Generally, a 2-3 inch binder is recommended because it can hold enough cards while being not too heavy to carry around. If you or your kid have just started to collect Pokemon cards, I suggest you buy an extra binder because you won’t believe how fast the collection grows!

Just in case you want to make it even better, there are Pokemon themed binders which have padded binder pages to keep your cards safe.

As the collection grows, you can add extra binder pages to your binder and store more cards in the same binder saving you some money (which you can spend to buy Pokemon cards instead!)

Do you own an extremely rare Pokemon card? Well, in that case, I recommend using hard case sleeves to keep them extra secure.

Q1. What is the most Valuable Pokemon Card?

The most Valuable Pokemon Cards are:

Q2. What is the most Powerful Pokemon Card Ever?

The most Powerful Pokemon Cards are:

Q3. What Pokemon card does the most damage?

Shadow Lugia is the only Pokemon card which does the most damage of 1,000 points. Its powerful attack, Shadow storm, requires four psychic energy cards to use.