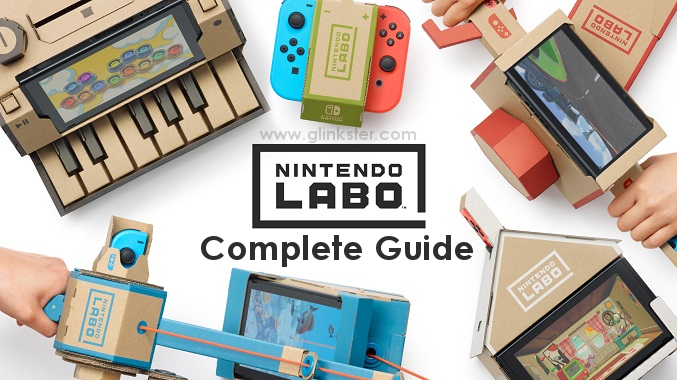 Nintendo, the popular video game company, recently announced their new series of products – Nintendo Labo. No, it is not a new gaming console or a video game. Nintendo Labo is a series of DIY cardboard toys that can be combined with Nintendo Switch to give an all new dimension to nintendo games. The new Nintendo Labo will be released worldwide on April 20, 2018.

First of all, for those who missed the news, here’s a quick introduction of Nintendo Labo. Check it out!

What is Nintendo Labo?

Nintendo Labo is a unique concept of toys made of cardboard which you can assemble yourself using the simple cutouts that come in different shapes and forms. Nintendo is calling these DIY cardboard toys “Toy-Cons“. These combine the magic of Nintendo Switch with the fun of creating your own toys.

Nintendo is branding this concept with the tagline “Make. Play. Discover” to let the kids discover the joy of creating and learning some concepts of physics too!

Definitely, Nintendo Labo is pretty cool thing for kids to have fun! Let us just remind you about a similar concept – ‘Google Cardboard, an inexpensive cardboard VR headset’ – that Google came up with in 2014.

As we already mentioned, Nintendo Labo comes as a set of cardboard kits that can be assembled into different forms (Toy-Cons). In the initial release, Nintendo will launch two main kits

Along with these, there is a supplementary Labo Customization kit consisting of handy materials like stencils, colored tapes etc. using which you can customise your labo creations. Sounds cool, right?

We can sense that you are already quite excited about it and want to know nintendo labo kit price, features etc. Don’t worry we are now getting right to it.

Let us have a detailed look at all the nintendo labo kits one by one and where to buy them.

Nintendo Labo Variety Kit is the first of the two Toy-Cons. As the name suggests, it has variety of cardboard cutout sheets which you can make into a piano, a house, a fishing rod and even a motor bike!

And all these get powered up when you connect your Nintendo Switch as per the instructions on each of the 28 cardboard sheet of this labo kit. The kit also includes Reflective sticker sheet, Sponge sheet, Strings, Grommet set and Rubber bands to make the toy-cons working.

A separate Labo software is also provided with each Nintendo Labo kit. With this combination, you get to use these toy-cons to control various games giving an augmented reality experience for kids.

You must be wondering what different things you can make with this kit. Well, below are the details of all 5 Toy-con projects you can make using the Nintendo Labo Variety Kit.

The second toy-con is named Nintendo Labo Robot Kit. This is an absolute dream come true for not only kids but even adults! Nintendo’s Labo Robot kit is actually a wearable backpack along with headset that can sense all round movement of your body and replicate them in the game automatically.

In simple words, it makes you land right inside the game!

Like the previous kit, this one is also completely made from cardboard and you can put the whole thing together yourself. There are no complex components involved so it is pretty easy for kids to assemble it. It includes two foot pieces, two hand pieces, one backpack and one headset – all made of cardboard.

Once assembled together, all you need to do is insert the Nintendo switch consoles, one in the backpack and other in the headset. After that you can control the in-game robot with your own hand, feet and head movements. Awesome, right? Whose up for the war? LOL. 😀

So, these were the two main nintendo labo kits going to release in April this year while the pre-orders have already started! But wait, there is some more to come. Check out the third surprise labo kit below.

Along with the Variety kit and the Robot Kit, a supplementary Nintendo Labo Customisation Set is also available for more creativity and do extra fun with the labo kits.

Priced at less than $10, this customisation set will help the kid express their creativity and style the toy-cons in their own way. You can draw on them, color them and decorate them to add the personalised touch to your toy-cons!

This set consists of a lot of stuff like that includes – two stencil sheets, two stickers sheets and two colorful tape roll with Labo logos on them. Customisation set is simply a great thing to give to your kids and let their creativity fly!

With everything said, in the end, it wont be an exaggeration to say Nintendo is totally redefining the video game landscape with this new Nintendo Labo. Also, we anticipate that you will see more interactive Labo kits releasing in near future.

But it totally depends on how customers accept this product. The early reaction is pretty good with lot of appreciation and buzz. On the other hand, there is a section of gamers who have thrashed Nintendo for pricing it higher then the expected price.

No matter what everyone says, the real figures will tell the real story after the release of Nintendo Labo on 20 April 2018. The pre-orders have already started on Amazon and you can get yours now!

What is the Best Pokemon Card Ever – Top Picks