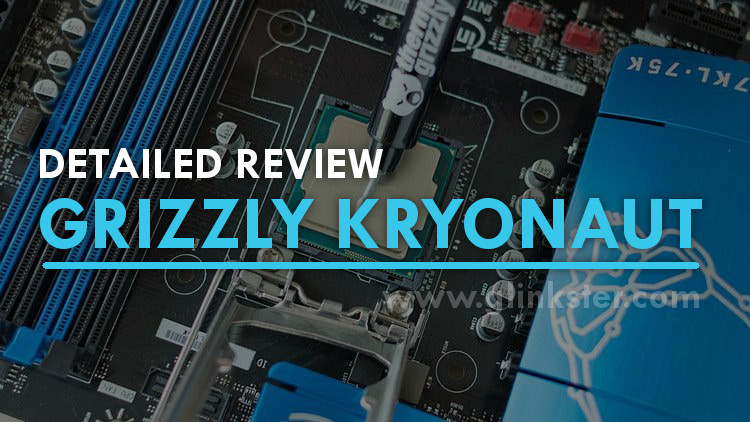 All my gaming brothers! Today, I will do Thermal Grizzly Kryonaut review – one of the most recommended thermal paste – which people claim to reduce temperatures by 10° to 15° C. So, let’s see if we can get some similar results or its just a hype!

See, We all have faced those times when our PCs start to burn like fire, especially my overclocking friends out there! And, most of the time reason is dying thermal paste as it plays a very important role in transferring the heat from the burning processor to the CPU cooler.

And, that happened to my gaming PC very recently. I knew that I am using one of the best cpu coolers so, clearly, the culprit has to be the thermal paste.

So, I decided to delid my processor and reapply the popular Thermal Grizzly Kyronaut! Before I take you through the application process and the performance comparison, first see some of the technical details.

Got the right amount of conductivity, ease of use and unmatched stability for working continuously under high temperatures for a long time.

So, what does mean to actually? It means Thermal Grizzly Kyronaut conducts the heat 30% more efficiently between the processor and the heat sink. With better heat conductivity, it open scope for overclocking CPUs to more clock speed. And, this is something that attracted me and many other overclocking enthusiasts towards it.

Clearly, the Grizzly Kryonaut has the capacity to practically reduce CPU/GPU temperatures drastically even on heavily overclocked rigs.

Secondly, this thermal grease (just another name for thermal paste) is not electrically conductive. So, that makes it safer to use. Even though it is rated at zero electrical conductivity, I personally suggest that you take special care while applying thermal paste because it can damage the motherboard circuitry if it gets in contact.

To avoid spilling, it comes with a spatula making it easier to spread on the surface.

What surprised me about the Grizzly Kyronaut is the operating temperature range. It can toil temperatures as high as 350°C while even the overclocked builds at 4.5GHz hit maximum 80°C. So, it’s very much capable of handling that even for longer periods.

Those were some main highlights that I could get from what Thermal Grizzly claims about this thermal paste. Next, I moved on to actually applying this TIM (thermal interface material) on my gaming pc! 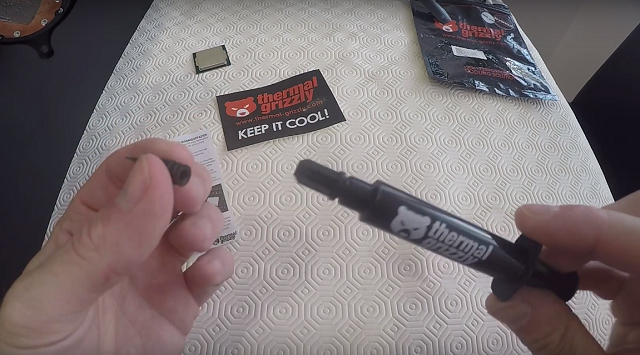 First off, when I removed the packaging, there’s this syringe-shaped tube along with an applicator tool which you can attach to the opening at the front of it. This tube contains 5.5 grams of the thermal compound which is enough for 8-10 uses.

What’s really innovative here is the applicator tool which makes the paste come out in form of a very thin layer already. That means no need of spreading it afterward and also avoids any accidental spills.

Moving on, here are testing rig details just to put things in perspective.

I don’t generally read manuals, but this one was a single piece of paper so I thought to go through it. They have explained how to apply the thermal paste using their new applicator tool.

But before anything else, clean the surface and remove any old thermal paste using a paper napkin or piece of cloth. Once, the surface is clean and shiny without any residues, you can go on to apply the thermal paste.

Applying the paste pretty easy, just mount the applicator on to the syringe and apply a layer as thin as possible covering the whole surface of the heat spreader. Here’s how I did.

Once there is an evenly thin layer over the surface, mount your CPU cooler carefully in one go. Make sure the thumb screws are fastened well enough.

As there is no significant burn-in time required with Thermal Grizzly Kryonaut, so I was able to begin the testing within a few minutes of setting everything back in the case.

For testing, I used the AIDA64 Extreme to log the maximum temperatures and check whether the claims of 10° to 15° C decrease in temperatures are true or not!

The AIDA64 uses a 64-bit multi-threaded stress testing module to drive the computer to its absolute limits. Below are the results which I was got after all the stress testing.

Let me tell you, the testing was done at a room temperature of 22°-23°C which is in itself a bit hotter than usual. 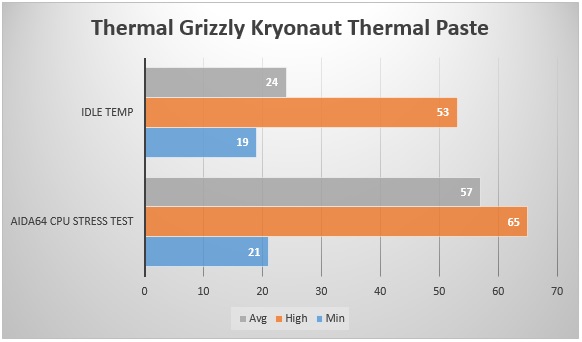 Ignoring the extremes, after applying the thermal paste, the average temperature under stressing testing was found to be 57°C which was 71°C before the thermal paste was applied. It is a clearly 14°C cooler than before. That’s quite crazy!

The main advantage of using this thermal paste is that you get a 14°C temperature gap which is enough to push the clock speed of your processor a few hundred MHz up and still have an acceptable operational temperature inside your build. So, clearly, it’s an overclocker’s paradise!

Thermal Grizzly definitely kept up to my expectations and I strongly recommend it to all those who want to go beyond the limits of processor and temperatures. It has the right amount of conductivity, ease of use and unmatched stability for working continuously under high temperatures for a long time. 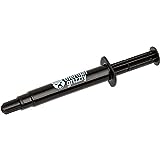 Though it performs like a champ, it is a tad overpriced which kind of balances out. Overall, I would say the claims of drastic temp decrement are right about the Thermal Grizzly Kyronaut. Now I have seen them personally and I am pretty convinced that I am recommending the right thing!

With that, I would like to wrap this Thermal Grizzly Kyronaut review but keep visiting Glinkster for more gaming product reviews and more!

Steam Controller Review: Worth it or Not?

My Logitech m570 Wireless trackball Mouse Review : Is it Best for gaming?